A few weeks ago a man who carries the cross around the world  accompanied me on a trip to the Interior. He had traveled to over 200 countries and walked over 35,000 kilometers. Paraguay was the final country for him to visit in South America. In talking with him, I was surprised to hear that he had experienced assaults and verbal abuse while walking in the U.S., much more than anywhere else. Combining this information with problems that we face at a church near the school and Ag. Center, I was discouraged. I did not sleep well the night we arrived in the Interior.

The next afternoon, I finished up a few things at the school and Ag-center, then headed out to find “the man walking with the cross.” I was surprised to find that he had not made it very far. As I stopped to pick him up, he said that he had not gotten far because people kept stopping him and asking him to sit with them for a while. He said that he was surprised by how many people knew me. One man said, “Yeah I know him — the priest.”

Angelica and I want people to know more than just who we are — we want them to know what we do and why.  Nevertheless, it is funny sometimes that we are not welcome where we think we are and don’t accomplish things through the methods that we think we will. The good thing is that an America walking in Paraguay and some missionaries working in education and agriculture — we can reach people.

Angelica and one of the youth leaders, along with other church leaders, recently took a trip to Ciudad Del Este. This city is about 5 hours east of Asuncion on the Brazilian border. There are five Methodist churches in Ciudad Del Este. Most of these churches have only around 20 members, but they have lots of youth.

After spending time with Angelica and the national youth president and seeing what the youth are doing in Asuncion, their youth were crying for more. They begged Angelica to come back and show them how to reach more youth and liven-up their relationship with Christ. 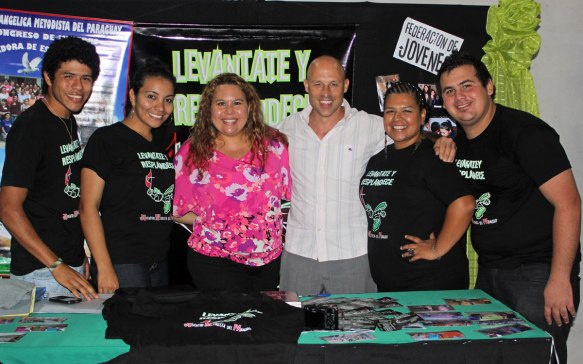 This has snowballed into an interest to travel to all the districts in Paraguay. Over the years we have been asked repeatedly to travel and visit, but have never really had the time. Leadership in our ministries, including great youth leadership, now allows us to consider this new option.

Just in case you wondered

I have internet just like y’all do at home and sometime I am surprised, and even a little discouraged, by how some people think Americas are perceived in other counties. I just want to say that hardly a week goes by that I don’t hear about how much someone appreciates and/or respects the U.S.  The Christians down here in Paraguay are very appreciative of what the American Christians have done for them socially and assisted in spiritually.

AnnaBelen asked me if “Princesses” really exist. I told her “Yes, especially here in Paraguay.”